I remember the day I pitched Honestly Ben to my editor. We were in her office in SoHo, and I was pitching her various ideas for my next book. A thought that had barely crossed my mind came out of my mouth.

“You know, a lot of readers are writing me after finishing Openly Straight and asking if there’s going to be a sequel. You don’t want a continuation of the story from Ben’s perspective, do you?”

(Note: the best, most confident people generally do not ask questions in the negative like this. Try to avoid.)

My editor’s eyes went wide. “Yes! This! Write me that book!”

Walking north on Broadway away from Scholastic, I thought two things. One was: Yay! She wants a book from me! Two was: How the hell am I going to do that?

You have to understand. Openly Straight was meant to be a standalone book. I wrote it purposefully, and I ended it the way I did on purpose (spoiler alert). I didn’t do it to break hearts; it didn’t really occur to me that it would. It had to end that way. Rafe’s journey necessitated him not being with Ben at the end.

So I had to go back in, open up the story, change narrators, connect with Ben on a deeper, more personal level, see Rafe through a different set of eyes, and find a brand new story that would both stand on its own, and satisfy fanatics of my most loved book. 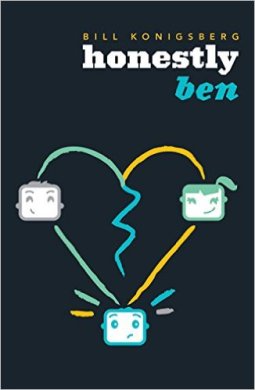 To be real: this was as big a struggle as I’ve had as a writer. The degree of difficulty, for the reasons stated above, was high. I sweated and I cried and I plunged deeper and I wrote and deleted and wrote and edited and then wrote and edited some more.

And when it was done, I had something. I wasn’t sure what I had, but it was something.

So I have to tell you that receiving three “starred” reviews for Honestly Ben, from Booklist, School Library Journal, and Publishers Weekly, is just about the best present a writer could get.

God am I glad. I so wanted to please fans of Openly Straight with this one. I so wanted to achieve something I haven’t done yet, which is to write a totally “not me” character. (Note to fans: when you call Carson from The Porcupine of Truth “deeply unlikeable” in reviews, you are calling me deeply unlikeable. Not that he is exactly me, but he has a lot of my flawed essence in him. Just so you know. If you want to hurt my feelings, go on and on about how deeply unlikeable he is on Twitter.)

I’m so excited to be able to share this with readers starting on March 28. Really I cannot wait. I hope that it gives everyone as much joy as it has given me this last year. And far less grief!

This entry was posted in Uncategorized. Bookmark the permalink.