I recently read with interest your call to remove 282 books from your local school library. In it, you claim to have reviewed yourself all of these books and deemed them unfit for K-12 usage (quite a range there!).

I saw that you included among these books my 2020 novel, THE BRIDGE.

First off, thank you for reading my book! I would be happy to chat with you about the book, to see what you took from it.

Second, I want to say up front that I believe your intent here is to protect your children. I echo your concern; I also want safety for children. It’s one of the main reasons I write books for young adults.

THE BRIDGE, as you know, is about two teens, Aaron and Tillie, who are severely depressed. They are both suicidal, and they meet atop the George Washington Bridge in New York City. From there, the book splits into four parts, illustrating all the possible scenarios about what could happen: they could both jump, they could both NOT jump. Or one or the other could jump. The novel follows the impacts of these decisions all the way out, so that readers can come to understand two things—just how difficult it is to be depressed and navigate the disease of depression, and also just how devastating one loss to suicide is to the whole world. 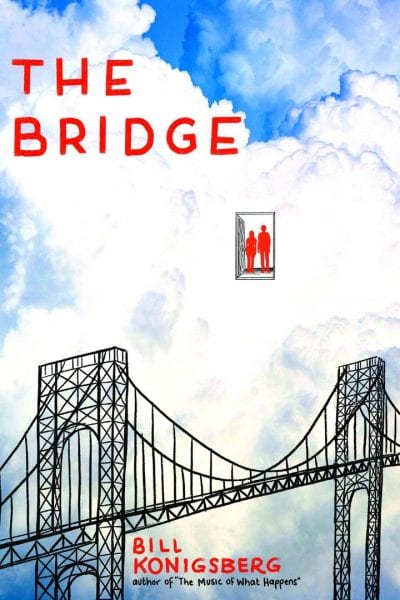 I was a bit surprised to see THE BRIDGE on your list for removal from the library. Not entirely surprised, as I was aware of Matt Krause’s list of 850 books he wants removed, which includes five of my titles. But still I was a bit startled, especially when I read your review of why the book ought to be removed.

You wrote that the book “Contains 1 or more of the following: Marxism, incest, sexual explicit material — in written form and/ or visual pictures, pornography, CRT, immoral activities, rebellious against parents, and the material contradicts the ISD’s student handbook.” As I looked through your screeds, it seems that this is how you describe each of these books. It’s as if you cut and pasted that complaint 282 times. That surprised me, because you took the time, you say, to read each of these books. That’s a lot of reading! Surely you have thoughts about these books you read beyond some cut and paste jargon? 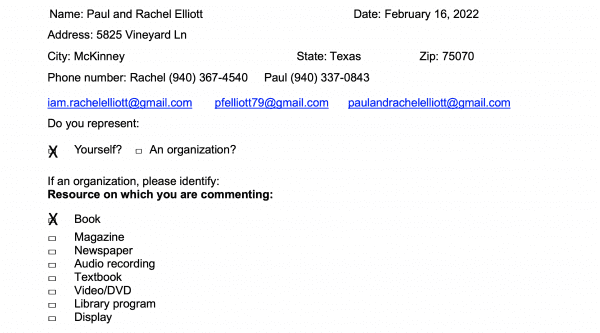 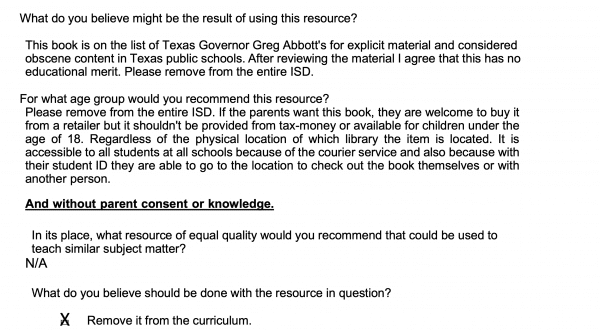 So I want to address these concerns. While I disagree that books should be removed from libraries because some people are uncomfortable with the content, I felt it made sense to go through these since you specified your issues with THE BRIDGE.

You suggest that the libraries in your district remove THE BRIDGE from its shelves. I guess the question I want to ask, since you have read the book, is: why?

Why, exactly, are you wishing to remove a book about suicide and depression from your libraries?

Perhaps you are concerned for the safety of your students. If so, I applaud you. Health and safety of young people is at the top of my list of concerns, too. As I wrote THE BRIDGE, I spent a lot of time ensuring that I wrote my book in a way that would help teens, not trigger them by making suicide somehow glamorous or sexy. Just like a doctor, who takes an oath to “do no harm,” I take my craft very seriously. I want my books to leave the world better than they found it.

That said, we live in a society where, increasingly, young people are dying by suicide. The reasons for this are too long to go into here, but I would say that among the reasons is isolation and feeling alone and misunderstood.

Right there, in a nutshell, is why I write books for teens. I felt isolated and alone and misunderstood as a teen. I so wished there was a book out there that had a person going through what I was going through. See, I was gay. I knew I was gay because of my thoughts, not because of any book or TV show, because there were basically none of those things back when I was in school. At the time, I was depressed and suicidal because I felt so alone. So I wanted to make sure no other young person went through that.

Do you think there should be books in the library that might help a depressed teenager feel a bit more understood? A book that stresses the importance of staying another day, even when everything feels hopeless? Knowing how concerned you are for the safety of your daughter, I would actually guess you would want a book like that available to your child when she gets older. Perhaps I am wrong.

My concern is that you didn’t actually read THE BRIDGE and said that you did. I say this because your list of 282 books includes the exact same concerns for each book. That seems lazy, at best. At worst, it is deceitful, which, I imagine, goes against the ISD handbook. I certainly hope you’re not doing that! It would be hypocritical to behave in ways that go against the values we try to instill in our children.

I think you didn’t read THE BRIDGE, and that in fact you would have been better served to include a book of mine that was more focused on LGBTQ representation. Not because you would be right, but at least then we could have a conversation about why you’re wrong about that, too.

I can say with total honesty that I wish the best for your child. I want for her to have every opportunity for joy and success in life. To experience freedom and happiness.

What I wonder, though, is whether you feel the same way for kids who suffer from depression? Or for kids who are gay? The truth is that like it or not, some kids are gay. Some kids are trans. To make the world safer and better for them, we need to have representation of those people in books. Books with LGBTQ characters save lives. I know because of the hundreds of emails I’ve received from kids who have told me my books saved their life.

Perhaps you would like it better if those kids repressed those desires and didn’t act upon them. Or tried to pray the gay away. I’ve seen that movie. I have met hundreds of men and women over the course of my life who have tried to do that. It doesn’t end well for them, nor does it end well for their spouses.

You might say this is blasphemous, but here is a question for you: what if it turns out your daughter is lesbian or bisexual? You might think this is impossible; I can tell you from experience that I have met hundreds if not thousands of teens and parents in that situation. Kids from conservative, religious households. Parents who believe that marriage is between a man and a woman and anything else is immoral.

You might think now you’d prefer the latter, but I see from the fact that you are doing so much to try to keep your child safe that perhaps you might change your mind about that. According to a 2021 national study by The Trevor Project, 42 percent of LGBTQ youth considered suicide last year. The number is much higher for trans and non-binary youth. I have heard the argument that this shows that LGBTQ youth are simply troubled, but I can tell you that’s not right. LGBTQ youth are at risk precisely because of endeavors like yours that aim to erase people like them from the library.

I’ll end with a prayer for you, because I know that you are religious. I pray that you and your family find prosperity and joy. I hope that in your prayers tonight, you will pray for at-risk kids who need these books. Because in many cases, their lives depend on it.