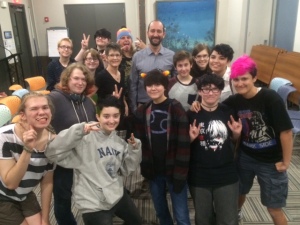 I started this journey with a subpar understanding of what transgender really meant, and I’m in the midst of a fast and wonderful education. I want to share that with you, so that maybe you can learn some things from these amazing kids, too. If questions come up for you, I suggest you work to continue this conversation. We learn by asking each other respectful questions. I still don’t know that I fully “get it,” but I’m trying.

In the dialogue, I am ME, and the teens are T. T is not for trans, but for “They,” a pronoun a majority of the teens feel comfortable with. Instead of naming particular speakers, I offer their words as a sort of Greek Chorus.

Finally: Snaps are the group’s way of applauding. They snap.

ME: My understanding of what transgender meant when I embarked upon this tour was a trans person is somebody who was born in the body of the wrong gender. What I’m learning is that’s a very simplistic way of looking at it, and that trans is a very wide range. Can somebody talk to me about that?

T: To me I picture a rainbow. It’s like one color on the end is one gender, and the color on the other end is the other gender. And there’s so many colors in between, so many ways to blend the colors together. That everyone’s on some individual point. You can put as many labels as you want on it. There can be hundreds of labels or there can be two labels. It doesn’t matter. Because you are just some little spot on that spectrum.

T: Everyone’s in their own place, so what’s happening is a lot of the topic of gender is way up in the air. So people are just making up terms that feel like they describe themselves but not a community. What I’m hoping happens is that our community or society as a whole starts to figure things out it will settle into bigger subgroups so that it isn’t so wide and intimidating.

ME: I want to get back to something you just said, because it really interests me and has been eating at me as I travel the country. How do you define gender? What is that?

ME: Is gender a choice?

ME: You’re saying it’s a feeling.

T: Yes. It can develop over time. I’m transgender and I consider myself male. I considered myself a tomboy for a very long time. And maybe my intense masculinity, for me I had the desire to be really masculine, but sometimes I wasn’t one hundred percent there, but I really wanted to be like that. So it branched out in that direction for me. But for others, one of my friends who is a trans man, he loves all sorts of girly stuff. But that doesn’t mean he’s any less of a trans man. Because gender is fluid. You cannot define it.

T: It’s almost like you can tell by the way you feel negatively, like if someone calls you a girl and you feel uncomfortable, you’re like, okay, then today or right now I want to be referred to as a man, or as a non-binary person. That’s how I felt for a long time, but I got to feeling a lot more uncomfortable with the female gender itself, so I just kind of, well, I guess I’m just trans.

T: It is different for everyone. For a long time I did identify as transgender. I never did feel very comfortable identifying as female, but I never one hundred percent felt comfortable identifying as trans. So after a while I began to realize I was probably some weird place in the middle on that wide spectrum we’re all stuck on. But a lot of the time I just prefer to see myself as me instead of having some label define me. I’d rather just be the person I am and have people accept me for that rather than whatever word I could call myself. I feel like a lot of the time the problem with society is there are these social norms we’re all expected to fallow and I think that’s really ridiculous. We should be able to express ourselves however we want to, not just for people to recognize we’re a certain gender.

ME: What you’re saying brings something up for me. As somebody who has been an advocate for LGBTQ people for a long time, it had always been my understanding that what people like me were trying to do was to expand the understanding of gender. There are so many things we are told we are supposed to be because of our gender, when we are part of this society. It’s all about, if you’re a boy you’re supposed to play with trucks and not dolls, and if you’re a girl you’re weird if you want to do construction work. And it has always seemed to me the battle is to expand that, but what I’m learning is, and I want somebody to talk to me about this, is that that’s not exactly what’s going on here.

T: I think gender is a very uncontrollable and ever changing kind of thing. And I do think that’s a deeply ingrained part of your person, and it grows as you grow. When I was like 13 I was like the girliest girl, and I went through this cis phase, where I tried to live up to a masculine identity. But then I decided it was okay for me to identify as male and still love pink things. I love thinking of myself as a feminine boy. But even saying that is putting a lot of restraint by giving them words like boy and feminine. They should be very open-ended words. (Snaps)

T: In my mind we’re born with certain body parts but that shouldn’t define our gender. Our gender is mental. And there shouldn’t necessarily be labels on gender. We like what we like, we do what we do. (Snaps)

ME: And we are who we are. What were you going to say?

T: I think gender is a … two people can be male and have very different experiences. Same with trans. Everyone experiences it differently. I don’t know where I’m going with this.

ME: No, you’ve said a lot. Because that difference of experience is whats so interesting about this. Two people can be very, very similar, one can see themselves as cis, and one can see themselves as trans. And just that statement, I don’t know that… do we all know how radical this is? You’re going to change the world. That’s exciting. I hope that’s not scary, but that’s what I think. I think you’re going to change the world. (Snaps)

ME: There are people who are very rigid and resistant to things being changed, to changes to things they’ve already defined but this is so interesting.

T: Gender is a very personal, individual response to an inherent factor that we are raised with in our society. It’s a concept we have to define for ourselves after we’ve been taught what we’re supposed to think about it.

T: I think it’s everyone’s life path. You start out in a place and you can’t help being born there and you go and choose what path you take. It’s in your heart where you’re going to go. From the very start. I feel like whatever happens, you’ll know in your heart who you really are.